Sounds Of The Letters – Clearing The Confusion 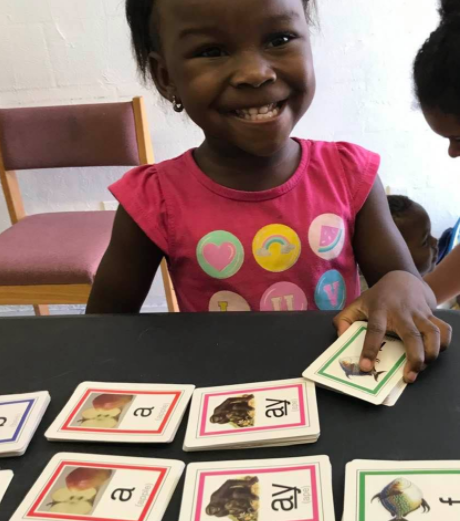 The Sounds Of The Letters Can Be Confusing

The sounds of the letters can be confusing English has 36 sounds, but only 26 letters. For millennia people have used letter combinations to make up the difference except for vowels. But vowels are in every word. Moreover, there are 13 vowel sounds and only 5 vowel letters. So the odds of being right are slightly better than one in three. If the word has 2 vowels your odds are down to one in seven and by 3 vowels you are at 1 in 20. Kids don’t like to lose and with this game winning doesn’t happen often.

Rocket Phonics solved that problem. Rocket Phonics use separate symbols for each of the 13 vowel sounds. Look at the two symbols for short and long a in the picture above. Your child will always know how to sound out every word. With 100% fidelity the child can always win.

Using Games to Teach the Sounds of Letters

The little girl above, Nora, didn’t talk. She was newly adopted and her mom, Tanya, assured me she couldn’t read. I could see Tanya’s point, but as I watched her the issue seemed more emotional than a physical problem. All I needed to do was make sure the other kids were having fun and sooner or later Nora would want to join them.

The picture above was taken the day she came to me speaking in full sentences and asking to play Go Fish which is like UNO. She wanted to play so much that she overcame her shyness. I love creating games that teach!

Academically, a four-year-old that can rhyme can read phonetic words. Their short term memory can hold about 4 sounds so the words need to be short. The mental processing this takes means you should keep the games to 15 to 20 minutes and then do something else.

Most important is you need to trust the process and watch your expectations. Reading is mental process, most adults read silently. But you need to hear the child read and four-year-olds have difficulty forming certain sounds. (Their r’s sound like w’s.) Model the correct sound, but never correct your child. If you are unsure whether its pronunciation or a misunderstanding wait a while and bring the same sound up again if the mispronunciation is consistent it’s probably not misunderstanding.

Be A Game Coach Not A Drill Instructor

Act like a Game Coach who models what he wants even plays with the kids and always lets the kids win. Trust that the game does all the teaching. The first games teach phonemic awareness which is hearing the sounds within a word. If your child isn’t ready for that then go for phonological awareness which includes phonemic awareness, but includes hearing syllables or letter chunks. The next games link these phonemes to letters creating what is known as a phonics system. The phonics system allows your child to sound out new words.

Beware about half of all English words are phonetic. Most four-year-olds get confused when they come across non-phonetic words. It is possible to teach them to read, but it is worthless if you don’t have a plan to attack the non-phonetic words.  This is why If the phonics system you are using has only 5 vowel letters you child has only a 1 in 3 chance of learning to read.